This Cal Alum is Driving the Future of Autonomy 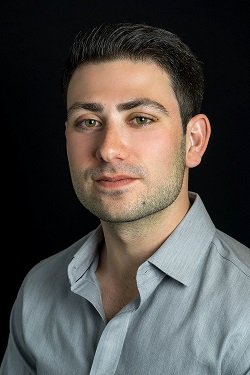 Jordan Greene was working as an operating partner at venture capital firm Tri-Valley Capital (now Tri-Valley Ventures) when he first met Luis Dussan, a charismatic optics and photonics specialist who had spent his career working at the likes of NASA (Jet Propulsion Laboratory), Lockheed Martin, and Northrop Grumman. Dussan was starting his own robotic vision company, AEye, with the goal to create a system architecture using an agile, intelligent sensor that could replicate the human eyes and visual cortex.

Greene took a particular interest in Dussan and his vision. Greene had previously worked in aerospace on flow control technologies to improve flight duration or payload capacity for UAV ISR applications. So when he met Dussan and learned about the system architecture he was developing using biomimicry, it resonated deeply with him.

“At the aerospace R&D company I was working at,” says Greene, “we were trying to maximize lift and reduce drag to ultimately optimize what you can carry or how long you can fly. And I remember looking at the value chain and thinking, where is the greatest value to the drone operator?” At the time, many people were focused on low altitude, slow flying fixed wing UAVs that operators wanted to carry the maximum payload, which consisted of relatively heavy advanced sensors such as cameras, RADAR, LiDAR, and more. These sensors would be used for topography, pipeline management, power line inspection, and many other applications. “I was looking at all the use cases and I remember thinking: what we’re really doing is enabling sensor companies to unlock a massive business opportunity in aerial data collection and processing.”

Greene wasn’t the only one interested in Dussan’s technology and approach; the response to Dussan’s pitch was overwhelmingly positive from both investors and customers. So when Dussan asked Greene to leave his job in venture capital and jump back into the operating world to help drive business initiatives as a co-founder at AEye, Greene did so without a moment’s hesitation.

Greene’s co-founder position at the early-stage startup required him to wear many hats: from business development to sales and marketing to partnerships and fundraising. As AEye has grown, Greene’s role has evolved to focus more on corporate development, fundraising and partnerships. Today, Greene is VP of Strategy & Partnerships. “I still support business development, sales, and marketing,” says Greene. “But I have a core competency, which is a narrower focus on investors and strategic partners and leveraging how we engage and expand in the various markets through those partners.”

At the core of AEye is software. “Edge intelligence and software configurable hardware are the keys to capturing salient and actionable information to enable the next levels of vehicle autonomy,” says Greene. “Delivering the optimal data to our customers is paramount to our success. And our business model is predicated on enabling channel partners to manufacture and distribute our software configurable reference architecture through established value chains.”

Greene believes the biggest challenge for AEye in the near term is staying focused on select markets and applications because autonomous technology offers an abundance of opportunities across many verticals including mobility, trucking, transit, construction, rail, intelligent traffic systems (ITS), aerospace defense, and more.

“With all the inbound interest, we are in a position where we need to keep our head down and deliver without getting distracted by niche opportunities. Our key markets present such immense opportunities that we simply need to hunker down and ramp up to meet demand,” says Greene. “What these markets need now are high performance, reliable products at the right price point, and we are on track to deliver on all those fronts.”

AEye is now on its sixth generation of the company’s iDAR™ (Intelligent Detection and Ranging) platform, and much of the company’s technology risk has been put to rest. Therefore, Greene thinks that the next challenge AEye will take on in the coming years is scaling to support customer volume ramps. “It requires supporting our contract manufacturers, Tier 1 partners, and system integrators in rolling out our solution to various markets,” says Greene. “Our eyes are on the prize, and we are focused on expanding our presence in the market and supporting our partners and customers in this new growth phase.”

Let there be light

During his time at UC Berkeley, Greene discovered and dove headfirst into the wild world of entrepreneurship. At Berkeley, he had the opportunity to learn from some of the greats, such as the late Rob Chandra, a longtime venture capitalist and former sitting Chair of the Berkeley Endowment Management Company for the UC Berkeley Foundation, as well as Kurt Beyer, an advisor at Parallel Advisors and a former advisor with Morgan Stanley who has been actively involved in a myriad of successful startups.

Greene also discovered and honed his passion for entrepreneurship in Berkeley’s Industrial Engineering & Operations Research Department (IEOR), in which he received a Concentration in Engineering Leadership from the College of Engineering. The courses he took brought together students from computer science, electrical engineering, mechanical engineering, the Haas School of Business, and other disciplines, to work together for a semester to build an innovative startup that would feature a proof of concept and detailed business plan. “The goal was to pursue a venture in a compressed time frame,” says Greene, “and it spurred a lot of interesting companies, some of which are still in operation today.” Greene credits the relationships he built during this time, as well as the learnings from that experience, as being instrumental in exciting his entrepreneurial spirit. It has also helped shape the way he approaches problem solving. “I look back fondly on those experiences and I’m happy to hear that Haas and several other departments at Cal have incorporated similar types of multi-disciplinary opportunities into their curriculum.”

Greene has made the Berkeley Founders’ Pledge and is also involved in the Cal Alumni Association, where he actively supports a number of different communities within UC Berkeley and the Haas School of Business, including volunteering and mentorship. “The pandemic has made people start to feel like they’re losing access to their community,” says Greene. “And that’s something Cal seems to be working on now more than ever - investing in resources and expanding their community presence to support alumni through this unprecedented time.”