Before Tesla Motors shook the auto industry by producing some of the most efficient and best reviewed motor vehicles ever made, the company’s co-founder, Marc Tarpenning ’85, operated according to a simple set of rules: find a problem you care about and produce a product to solve it.

“People have asked me why I would want to start a company. And the answer is because there are things worth changing,” Tarpenning explained to a packed house of over 350 students in a recent Berkeley Innovators lecture co-sponsored by The Foundry@CITRIS. 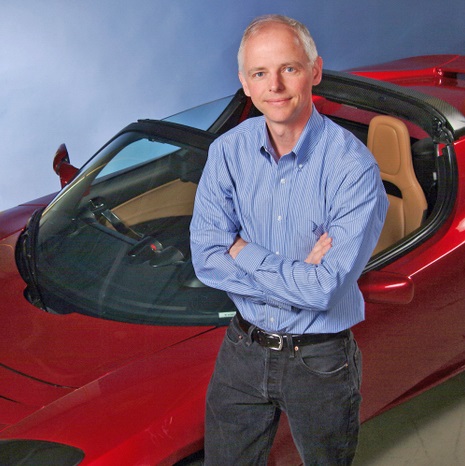 Tarpenning has kept a relatively low profile compared to his co-founder Martin Eberhard and Tesla CEO Elon Musk. He has become a sought after mentor to and investor in green technology companies, and a fierce advocate for education. And in February, he returned to Cal to share his story with current students, highlighting the importance of teamwork, the power of mathematical modeling, and the necessity of producing a product that will delight its customers.

From E-Books to Electric Vehicles

After graduating from Cal in 1985, Tarpenning landed a job involving extensive global travel. He and his team toted big bags of books around the world for years before Tarpenning met Eberhard, and the two began searching for a better way to transport content. In 1996, they began speculating about whether increasing battery efficiency and the advent of online bookstores could support the development of an electronic book. They studied the publishing industry, searching for other forms of disruption to complement battery development and internet sales – developments that could open doors to innovation. And they found what they were looking for in digitization. “Now remember, this was the stone age,” Tarpenning quipped, “but even in the 1990s, the publishing industry was becoming increasingly reliant on digital technology.” While many authors still wrote their manuscripts on typewriters, publishers had moved away from film scanning, and instead, employed people to type manuscripts into computers for digital typesetting. “So suddenly content was becoming digitally available. That was hugely disruptive.”

In 1997, Tarpenning and Eberhard co-founded NuvoMedia, an e-book venture that produced the RocketBook in 1998. “While it may look like a stone age thing now, it was kind of cool for the stone age. More importantly, it created a better reading experience for a lot of people. For the sub-set of customers we were targeting, it actually transformed lives.” Customers were delighted. NuvoMedia was soon acquired by Gemstar-TV Guide, and Tarpenning and Eberhard began searching for the next problem to solve. “In 1996, we picked books. In 2003, we really upped the ante and went after oil.”

Tarpenning and Eberhard carried this three-step process – study, disrupt, delight – into their next venture. As they had done once before in the mid-1990s, the duo began by investigating the problems associated with oil. “The neat thing about oil is that there are tons of issues. Oil is a disaster in almost every way you think about except that it provides a lot of our energy. You can’t just get rid of it.” Once they understood the slew of problems at play, Tarpenning and Eberhard began asking questions about oil’s uses. They determined that transportation accounts for the vast majority of oil consumption every year, and set out to change the way we move around in the world.

With transportation as their new focus, the team hit the books again, this time studying the car industry. “We looked at how cars are made, sold, and consumed. Who sells cars? How do you sell cars? Who buys cars? What are their criteria? Does anybody enjoy buying cars from a dealership? We followed every lead we could over months and months. And we learned a lot.”

Most important among these lessons was an understanding that the car industry is incredibly slow to change. They had hit entrepreneurial gold. “To get into an industry where the incumbents are old and not so flexible is perfect as an entrepreneur.”

They began searching for evidence of disruption in the car industry, uncovering the charged and tangled history of California’s zero emissions mandate, its reversal in 2002, and later, and the so-called death of the electric car in 2005. Lithium-ion batteries had continued steadily improving, computers and power electronics had become increasingly sophisticated, and changes to the car industry’s manufacturing systems had opened a yet another door for disruption.

Realizing that they could take advantage of this technological momentum, Tarpenning and Eberhard began studying the customer again, this time focusing exclusively on those who had bought and leased electric cars prior to 2002. They determined that these people were not simply penny-pinching tree huggers and technology enthusiasts, as General Motors and other industry giants had assumed. Instead, they were among the richest customers in America. Toyota began noticing the same trend, as early models of their hybrid Prius began cutting into the company’s Lexus sales.

“Our conclusion was that customers were not buying these cars not to save money. These people weren’t concerned with how much money they were spending on gas. Every driveway in Palo Alto had the Porsche and the Prius, and the owners spent more on lattes than they did on gasoline.” Tarpenning and Eberhard concluded that California’s most elite buyers had traded in their Ferraris for Priuses because they could afford to project the image of doing the right thing.

“We knew we didn’t want to make a punishment car. If you think people are going to buy a product simply because it makes them a better person, you’re fighting a tough battle. You really want something that is actually a better product. You want the customer to be delighted. So we created some mathematical models using an Excel spreadsheet and determined this was actually achievable. That’s the only way Tesla worked out.”

Tarpenning and Eberhard subsequently began experimenting with batteries and wrote a business plan. They incorporated Tesla Motors in April 2003. By April 2004, they began raising venture capital, supported by two small venture firms and famed investor Elon Musk, who led the round. They began styling studies and hired a small team. By April 2005, Tesla had brought in Series B funding though another round led by Musk, and began modeling the first Roadster – first in clay and then digitally. In April 2006, they began building prototypes to be crash tested on tracks around the world, and by January 2007, after another round of funding and thousands of changes to the initial prototypes, the company released its first validation prototypes. They had their first real production line on a test track by January 2008, and in March 2009, Tesla delivered the first Roadsters and announced the Model S.

Since then, the Model S has been called the best car ever reviewed by Consumer Reports. It earned the distinction of Motor Trend Car of the Year in 2013, outselling every other luxury sedan. Morgan Stanley called Tesla the world’s most important car company, and a nationwide survey found that Tesla had produced the most loved vehicle in America. As the company grows, the price will continue to come down. Tarpenning’s hope is that fast, efficient, and delightful electric cars, like once-unaffordable mobile phones, will someday become equally ubiquitous.

What will you change?

Having built a car with the potential to transform the way we think about motor vehicle transportation, Tarpenning and Eberhard have left Tesla in the hands of CEO Elon Musk. But Tarpenning isn’t done looking for problems to solve. “So what’s next?” he asked of Berkeley’s current students. “All of you are heading off into the world and there are all kinds of big challenges ahead. Everything is going to change – it simply has to. Because unlike in the last 100 years when we could always just dig more stuff out of the ground, that isn’t true anymore.”

He continued: “I don’t believe in the vision where we’re all living in yurts and raising goats or something. I really think it’s much more exciting to envision a sustainable future than can go on for centuries or millennia. We can get there on our enormously powerful technology pyramid. But we actually have to do it. We can’t just sit around and expect it to happen.”

Among the challenges ahead, Tarpenning explained, today’s students will need to answer questions about how we get our energy, how products are made, and how food is produced. “We face huge opportunities for new solutions,” Tarpenning concluded, “So what will you change?”

Interested in learning more about the Berkeley Innovators? Check recent profiles in the Alumni Spotlight section of innovators.berkeley.edu.