As grownups ponder the toy aisle this holiday season, one refreshing concept will stand out – gender neutral play. While many boys will still seek trucks and many girls will ask for dolls, one new company is seeking to bridge both sides of the aisle, inspiring girls (and boys!) to build by giving them tools to literally build their own stories. 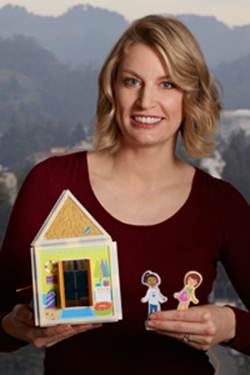 Build & Imagine, founded by Laurie Peterson MBA ’11 creates magnetic construction sets that inspire storytelling. Comprised of colorfully illustrated magnetic panels called StoryWalls, the themed play-sets also include magnetic dress-up characters and dozens of magnetic costumes and props – all of which can be constructed any way kids like.

Focused on empowering children to build customized scenes that spark storytelling, Peterson landed on the idea for Build & Imagine shortly after graduating from Berkeley-Haas. A toy designer and a mother, Peterson noticed that the kinds of play experiences she enjoyed as a child (involving building, creativity, and experimentation) were poorly represented in the girls’ section.

After a soft launch in late-2013, Peterson raised startup capital through Kickstarter and the UC Berkeley LAUNCH Competition before setting up residence at Berkeley SkyDeck in the Spring 2015 cohort.

As of October 2015 – six months after SkyDeck demo day – the Build & Imagine collection now numbers five and toy industry has taken note with an armload of awards (and counting) this year! “When we launched at the beginning of the year, we knew that building would be empowering for girls,” said Peterson. “We hadn’t anticipated how powerful the storytelling would be. Unlike a traditional dollhouse in which the setting is fixed, with Build & Imagine play-sets, children direct not only how their characters interact in the scene, but also what the scene itself looks like. The imaginative play that results is immersive and inspired.” 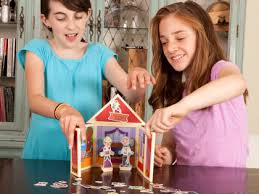 The inspiration behind Build & Imagine isn’t just about fun and games. As Peterson set about designing a construction toy that could appeal to girls and boys, she also sought to design a tool for encouraging left and right brain play – one that would contribute to foundational language and STEM skills.

Experts in language development and cognitive science attest to the developmental value of the play-sets. “A great toy to stretch language skills is [one that is] flexible and designed for constant revision as creativity rules,” writes speech and language learning expert Sherry Artemenko. “Build & Imagine StoryWalls provide settings, characters and props to start the story… so a child can invent a story and take it in different directions. Kids are practicing dialogue, learning and using new vocabulary, and if there is more than one child, solving problems and negotiating plots and character’s actions.” Researchers at UC San Diego agree. A recent study in the lab of Professor Alison Wishard Guerra found that the Build & Imagine play-sets and others like it may help in the development of foundational STEM skills like spatial reasoning and problem solving, addressing the widening achievement gap between men and women in STEM by encouraging girls to build at an early age.

As Peterson navigates the stress and uncertainty of building a startup, the impact of her product on the lives of real families keeps her going. “I hear about girls who have never enjoyed building who are now beaming with pride as they construct 3D scenes for their stories.” Peterson told us. “This week I received an email that an autistic boy engaged in role-playing for the first time with our new Fairytale Theater set. This was a huge step forward for his development.”

Located in nearby Oakland, Peterson remains connected to Cal. As a member of the Berkeley Founders’ Pledge, Peterson has join a community of startup executives who have tapped into Cal’s vast ecosystem of resources and pledged to support the university as their ventures mature. “I carried my learning mindset from Haas into my entrepreneurship style. I approach each stage as ‘what do I need to learn/prove next to become a successful company?’”

After graduation, Berkeley’s SkyDeck accelerator provided additional support from within the Berkeley ecosystem. “SkyDeck gave my startup the support and community it needed to get off the ground. I am thankful to have been surrounded be a group of entrepreneurs achieving amazing things during our early months. It extended this feeling I had at Haas that I could achieve anything, because I was a member of this impressive group of people.”

Her advice to other Berkeley founders: “Have faith. If you try to map out every step you need to take from Day One to ‘success,’ you will be overwhelmed. Instead, make decisions about what you need to learn/prove next, and have faith that each step forward (and sometimes back) is heading somewhere meaningful.”