This excerpt is taken from the article Victor Ho: Take Management Advice from Interns which originally appeared in the New York Times on September 23, 2016. 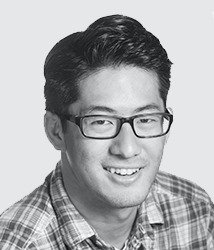 Were you doing entrepreneurial things when you were younger?

If you use entrepreneurial as a euphemism for doing crazy things and causing a lot of trouble for many people, then yes. My personality, since I was little, was basically that if I saw a boundary of any sort, I wanted to either break it or see how far I could push it.

So I was a terrible child and causing trouble at school all the time. During fifth grade, I would get a colored slip of paper from my teacher every day at the end of class. Green meant I was a normal child that day. Yellow meant I caused trouble, and red meant I caused a lot of trouble. I would have to show that slip to my parents.

I don’t know. I was uncontrollably curious about different things and always running around to figure something out. So there was a lot of troublemaking.

There were times when it was somewhat useful. There was a statewide exam in California that they give to every single kid, and on the science exam in elementary school, I found a question where I believed all the multiple-choice possibilities were wrong.

I got into this massive argument with my teacher. He said, “The test has been reviewed many, many times. It’s right.” He finally said that he’d submit it for review, and it turned out that I was right. They changed it statewide.

Tell me about your parents.

They immigrated from Taiwan. My dad is an engineer. He worked for Rockwell on the space shuttle program and now for commercial airlines. He met my mom at Rockwell. She’s an artist and was a drafter at the time.

My dad is extremely meticulous. One of the key messages from my dad was about attention to detail. I took that to heart as a kid, and there was a long period when I refused to color with crayons. Instead, I would draw on graph paper with protractors and rulers.

My mom is more of a creative type. I have clear memories of her telling me that there is no such thing as a mistake when you’re drawing. If I messed something up, she would say no, and then turn my errant line into a tree or something.

Did you know what you wanted to do for a career before you went to college?

I had a sense, but there was a strong turning point for me. Until my senior year of high school, I was the know-it-all. I thought I was supersmart. I got a 1,600 on my SATs, even though I didn’t study for them. But I had terrible grades because I ditched class all the time.

But then I got rejected from every college I applied to — every single one, even my safety schools. I also totaled my car, and some things happened around a set of friends I had. Basically my life fell apart. It was a period of massive humbling.

But then my life came back together. Arnold Schwarzenegger was governor at the time and reinstated the education budget, and suddenly I got into Berkeley. A lot of things fell back into place, and that was the moment when I decided, O.K., I’m going to stop wasting my life away.

You worked at McKinsey right out of college. Tell me about that experience.

That was when I was 22 and 23, and I was in meetings and running projects with very senior people. I knew I had to figure out how to present myself in ways that would make me seem older and more experienced. So I had a number of rules for myself.

One was that in front of clients, I would try my best never to smile, because if you look serious you’ll seem older. And whenever they asked me personal questions, I would give completely noncommittal answers to make them think I was much older. So if they asked me, “Do you have kids?” then I would say, “Oh, kids are a handful.”

But the strongest lesson I learned at McKinsey that I now share with every single new hire is what they call the “obligation to dissent.” It means that the youngest, most junior person in any given meeting is the most capable to disagree with the most senior person in the room.

So if I hire an intern, that intern is the most qualified person in the company to say, “Victor, I heard this was your mission, your values, and these things are off.” That’s just because the more removed you are, the less you drink the Kool-Aid. You have a fresh perspective.

How do you hire?

I want to figure out why you work and what your deeper purposes are. So I’ll ask a lot of questions around that. When you retire, or when you’re on your deathbed, what do you want to be able to look back and say you accomplished?

I want to see if the person has thought on a very deep level about why they dedicate such a big portion of their life to what they do. Another question I like to ask is, “What is the hardest thing, personal or professional, that you’ve ever been through in your life?”

What career and life advice do you give to new college grads?

There are two things. The first is to really figure out what you want your life to stand for, and don’t sell yourself so short on work. People often settle for the small victories of a big name on their résumé or a certain salary and forgo the deeper and more important joys of figuring out what they really care about and aligning their life with it.

The second thing I would say is just don’t be a stereotypical millennial. Work hard and the promotion will come when you’re living the role. If I had my way, every college graduate would start their career at an investment bank. They could learn what hard work looks like, and learn their place in the broader organization. Then they would go somewhere else.

Interested in joining Victor in his commitment to Cal? Make the Berkeley Founders Pledge , like Victor did, and have an impact from Day One of your latest venture.